What was it like to live in Evansville, Indiana in the 1920’s?

Where did the early members of the first documented Church of Christ congregation in the city shop and work? How did they entertain themselves? Did they live in an outpost? What was transportation like? The answers to some of these questions will give one a perspective of what it was like to be a Christian in Evansville in those early days.

The city celebrated its Centennial in 1919, and then kicked off the new decade of the twenties. It was a teeming metropolis of 94,000 people county wide in 1920. It had come a long way since Hugh McGary stepped off his boat onto the Ohio River bank in 1806.

Though the furniture industry was mostly gone (the timber lands had been generally harvested), employment was bolstered by companies like Bucyrus Steam Shovel Plant, Graham Glass Works, Faultless Caster and Mead Johnson Company. Other employers that played a big role in the economic scene were Graham Brothers Truck Manufacturing (later to be Chrysler Plymouth), General Cigar (later Fendrich), and Servel (the maker of gas refrigerators).

People had to take a ferry across the Ohio River to visit in Henderson…but at the same time several airports dotted the landscape. Travelers could stay at the McCurdy Hotel, reputed to be the best hotel between Louisville and St. Louis. You could buy your prescriptions at H. A. Woods Drug stores and stop by the new Evansville Central Library and check out the latest novel. The Dixie Bee Line (later to be part of Highway 41), sported the newest in highway construction materials and allowed you to drive comfortably all the way to Haubstadt 16 miles north. And, Reitz High School was there to educate the kids (being second in construction to Central High School). You could do your banking at Citizens Bank and go to a baseball game at Bosse Field.

But it was not always easy being a citizen in Southern Indiana. The world wide Spanish Flu that killed up to one million people in 1918 was an active memory for everyone. This was followed by the Griffin Tornado (a community not far from Evansville) that killed 695 people. There is much, much more to the story, but this gives one a small picture of the Evansville environment surrounding that first congregation.

In many ways the national and world environment was not favorable for religion. And, we might suspect that it played a role in the efforts to start a congregation of the church in Evansville. Crime was rampant across the nation, alcohol prohibition was the law of the day, the Scopes (monkey) Trial made headlines and the Valentines Day massacre shocked the country.

The First Documented Assembly Of The Church Of Christ In Evansville, IN

Research discloses that the first documented assembly of the Church of Christ in Evansville, IN occurred during 1924. The location name, if there was one, is no longer remembered. While there is some oral evidence that a small number of Christians lived in Evansville and crossed the Ohio River by ferry to attend worship at a Kentucky congregation prior to 1924, no documents have been discovered that give any detail of those events. During 1924 Joseph C. Schmidt and family moved to Evansville from Denver, CO. Information telling why the family came to Evansville has not been found. Sister Aline Ubelhor remembered bits and pieces of a story that suggested Mr. Schmidt was a “railroad man.” This may well have been the case inasmuch as there was a significant amount of railroad activity in the area during this time period. Finding no congregation of the church, initially the family met in their home on Sunday. While it is not known where the Schmidt family lived, if he did work for the railroad it is likely that it was on the west side of the town. This was further indicated by the location of the first non-residential meeting place on West Franklin Street.

Seeking help to develop a congregation, Brother Schmidt turned to the church in Sherman, TX and engaged the assistance of Everett B. Scott. Together they arranged for John F. Smith of Basel, KS to hold the first documented gospel meeting of the Lord’s church in Evansville. This appears to have occurred in either 1924 or 1925.

Members who worshiped at Carpenter’s Hall circa 1925

The first known meeting place (other than the Schmidt home) was in a building at St. Joe Avenue and Franklin Street. Exactly when the congregation began to meet there is unknown, as is the date that it moved to the next location. But whenever the move occurred, it was to the Carpenter’s Hall address (Fourth Avenue and Franklin). 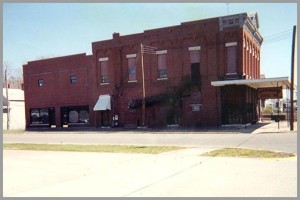 No information has been discovered about located ministers preaching for the congregation during the 1920’s. Some oral history suggests that Brother Schmidt did preach from time to time and that he was “long winded.” In addition there is some indication that the worship services included substantial singing sessions and some class presentations. A few written comments were uncovered that identified visiting preachers, one of them being W. F. Lemmons from Texas.

Baptisms In The Ohio River

Sister Aline Ubelhor writes in her notes that baptisms took place in the Ohio River (and that she remembers numerous times that ice had to be broken in the winter months).

A church membership register from this period identified 13 families in the congregation.