Very little information has been discovered about the Fourth Avenue and Franklin Street (Carpenter’s Hall) meeting site other than that the congregation moved to this location. While we can determine that this occurred before 1935 (and probably before the end of the previous decade), an exact date is not known. Some documents noted that members needed to arrive at the new worship location early on Sunday to clean up the “whiskey bottles and playing cards” left from the previous Saturday night lodge meeting. Since the Prohibition of Alcohol period extended until 1933, this obscure comment might suggest that the congregation was using the building after that date. It was noted that church members shared their worship space with a coffin that was used for “initiation rites” in connection to becoming a member of the lodge. This building continues to stand today.

Hardships  Were Not Limited To The Great Depression

What is known is that the growing group of Christians likely had a difficult time in the 1930’s. The Great Depression raged throughout the period and it would be foolish to assume that the church family escaped its ravages. Hardship in Evansville, like around the country and world, took its toll on almost everyone. Jobs were scarce. People were often hungry and, by extension, one can suppose that included some of the early Evansville Christians. But the difficult conditions were not limited to economic issues. Late in the decade the 1937 flooding of the Ohio River destroyed property and dislocated people along its course and Evansville was right in the path. Oral history tells us that the church family had to move its meeting location from the new building on Governor Street (one temporary worship place used was the Majestic Theatre). But, the times were not all bad. The WPA had a presence in the city and helped build a new airport (air travel came of age during this time and the revolutionary Douglas DC-3 airplane served this market). Customers bought goods at the Sears Roebuck Store (the first branch store of the Chicago company). People no longer had to take the ferry to Henderson; the Evansville-Henderson Bridge opened for traffic in 1932. Mesker amphitheater provided “under the stars” entertainment and the Coliseum was renovated (and you could see a variety show for ten cents a seat). Moreover, despite the bad times, manufacturing continued, trains moved along the rails, ice cream was produced by the Ideal Pure Milk Co. and the early church family survived to continue telling the story of Jesus in the community. 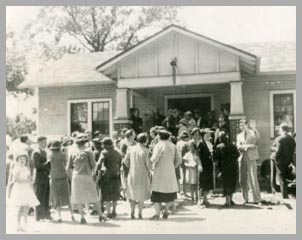 Although, as noted previously, it is uncertain when the congregation moved to or from the Fourth and Franklin location, there is documentation making it clear that the church was meeting at its next location, 1715 S. Governor Street, in 1935. By this date the church was assembling regularly on Sunday morning for Bible School at 10:00, worship at 11:00 and for Sunday evening worship at 7:15 (there was no mention of mid-week Bible Study assemblies found). Documents note that the congregation was then identified as the Evansville Church of Christ.

A church directory, with a picture of the Governor Street building, lists 89 members in 1935. Some names on that list that may be familiar to present day members are J. B. Groves (a long time Evansville jeweler), Mrs. Paul (Ruth) Harmon, Parnell R. Hardy, Doyle Heath and Aline Ubelhor. A Register of Members (covering a period of several years, but ending in 1943) lists some families that were members of the congregation during that time. Some of these members were instrumental in the development and growth of the congregation (Evansville, Bellemeade Avenue and Washington Avenue) well into the late 20th century.

When speaking of the early congregation, Sister Aline Ubelhor reported that the Governor Street property was built on a “house plan” without the interior walls. She stated that the most exciting thing about the building was the baptistery and classrooms in the basement. As mentioned above, she also commented on the property being surrounded by water during the 1937 flood and that for a period of time the church met at other locations (including the old Majestic Theater). Financing for the building was secured by Brothers Groves, Sager and Elliott, but before the building was completed the preacher and treasurer left town with the money. Brother Groves and Brother Sager were able to secure funds to complete the project.

In 1935 H. C. Hutchinson, supported by an unidentified Nashville congregation, came to Evansville to preach for the church every third Sunday. In 1938 Charles Campbell became the congregation’s first full time minister and continued in the role until 1940.

The Trustees listed in 1935 were Archie Stone, Blain Groves, William F. Schmidt, Claude Vetter, Andrew Armstrong and Edward Snow. In 1938 Joe A. Peck, P. R. Hardy, Dr. Joseph H. Willis, Carl Mosier, Henry Hunt and Robert Miller had been added as Trustees. Archie Stone, William F. Schmidt and Claude Vetter were not included in this list. The documents do not make clear if these trustees were elders of the congregation.

No documents were found that told about the activities of the congregation. Were they evangelistic? Did they have benevolent programs? Were there youth groups? Did they have gospel meetings on a regular basis? Little information was found to answer these questions. A church directory and yearbook for 1935 notes that there was preaching on the third Sunday of each month. The year book was a teaching tool, addressing such topics as the Church name and teaching, how to become a Christian, music in the worship and a general discussion of financial matters. 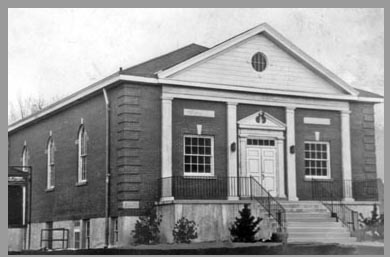 Although the decade that came to an end in 1939 had been economically difficult, it is logical to think that the church had survived it in good condition. None of the materials reviewed disclosed data about individual Christians or their wealth; even so, for the congregation to embark upon a building program suggests a level of economic strength. Additionally, one might infer a high degree of commitment. And that was exactly what occurred. In 1939 the congregation constructed and moved into a new building at 1212 Bellemeade Avenue.