Life and events in Evansville during the first half of the decade, like the rest of the country, was driven by the Second World War. Though no documentation is found that tells how these events impacted the Bellemeade congregation, there can be little doubt that members and their families shared the same experiences as the rest of the country and world.

Industry in the city took on a war footing. The Chrysler-Plymouth plant stopped making cars and started making bullets. Servel began to produce refrigerators for the military. Shane Uniform made military uniforms. Republic Aviation built P-47 fighter planes. In 1942 the first LST (LST-157) was launched into the Ohio River. One in five of Evansville’s boys and girls age 14 and older worked in the war plants. “Rosie Riveter” was alive and well at the shipyard and aviation plant.

Finally, the war ended and people started building cars instead of making bullets…and otherwise returned to a peace time economy. Evansville College had its greatest growth period, retail business came alive and the Evansville Braves baseball team captured the heart of the town. Religion was important in the city with a resurgence of related events; perhaps the most notable being the Oral Roberts Revival in 1948. Likely the Bellemeade congregation benefited from this religious friendly environment.

The first half of the decade was overwhelmed by the Second World War and that, no doubt, contributed to the lack of written information surviving the period. The passage of time also played a role. Whatever the cause, the results are that we know very little about what happened in the church family during the decade.

The Lord’s Church Grows And Reaches Out To The Community

One church membership directory (thought to be for 1945) lists 223 church members. Random notes discovered among old papers disclosed that Bert and Thelma Hart served as custodians for the church in 1941. The congregation presented a radio program on WSON in 1947 (indicating their concern for community outreach). It appears that the church installed its first telephone in 1949. A partial copy of a bulletin dated February 6, 1949 states that A. C. Dyson, the minister at the West Side Church, was involved in a debate with a denominational minister. That bulletin reported contribution income of $991 in January and expenses of $710. 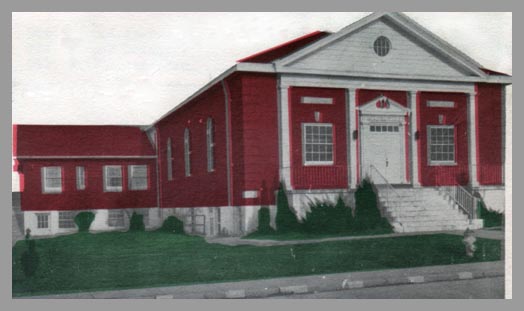 While detail for the construction of a new building on Bellemeade Avenue is lost, this picture shows that it was substantially larger than the “residential building” on Governor Street. Improvements that followed in the next decade matched the growing needs of the congregation…and expanded the facility dramatically.

It can be concluded that by decade end the congregation was making great strides…if for no other reason than the events that unfold during the following 10 year period.

The West Side congregation had its beginning during this decade. A document titled HISTORY OF THE WEST SIDE CHURCH OF CHRIST, dated in 1969, reports that the congregation first met together in May, 1945. There were seven members attending that first service, some of which were former members of the Bellemeade congregation. Sister Aline Ubelhor recalls that there was a disagreement among Bellemeade members relative to a “lodge connection,” and that precipitated a division that lead to the formation of the new congregation.

Even though documentation is limited, research did disclose the following information about ministers and elders: