The fifties brought a new environment for the congregation. Religious activity was seen in a positive light throughout the country and evangelistic opportunities abounded in the local community. The congregation became very evangelistic and the outreach efforts resulted in substantial growth. There was a heightened degree of cooperation among area congregations and with that came a strong sense of support for collective efforts to advance the cause of the Master. It was a period when gospel meetings were still effective in reaching out to people. The Bellemeade congregation often conducted such events to tell the Master’s story. 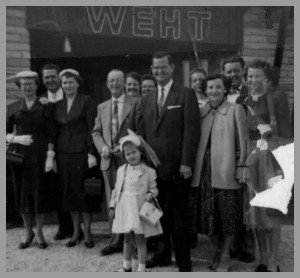 During the 10 year period ending in 1959 the congregation focused on telling the story of Jesus on many fronts. Mission activities included support of congregations in Boonville, IN; Owensboro, KY; Mt. Vernon, IN; Morgan Avenue in Evansville, Line Street in Evansville and New Zealand (and no doubt others that have been forgotten). Both television programming (WEHT-Henderson) and radio sermons (WBNL-Boonville) played a role in the outreach ministry.

Aggressive newspaper advertising supported the overall efforts. It was a period when “daytime” Vacation Bible Schools attracted children from throughout the community and these annual events were a key component of the congregation’s ministry. A local newspaper article, dated in June, 1957, reported that 457 students were enrolled in the 1957 VBS. 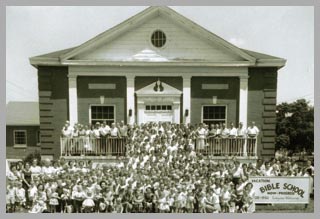 The article goes on to note that “around 700 persons were present on Wednesday evening for a program featuring the work of all classes.” Perhaps more than any other, this 10 year period was characterized by an evangelistic zeal.

A legacy from that time is the strong youth group that exists in the current congregation…maybe having its genesis in the grandparents that were participants with the youth groups of the fifties. While social activities were an important part of the mix, an equal amount of time and energy was spent on service projects supporting the work of the congregation. For a part of that decade, the weekly church bulletin was published by young people in the congregation.

As one would expect in an environment of evangelist outreach, Biblical education received its full share of attention. The Bible School was extensively promoted and many programs that would serve well in the coming decades had their beginning in this time frame.

These numbers will help put this period in perspective and document the strength of the congregation as the decade closed. During 1959 forty seven individuals were baptized, 7 were restored and 24 families placed membership. A record Sunday morning Bible School attendance was set at 355. Moreover, the largest worship service attendance, ever recorded by the congregation to this point, was achieved when 451 people were present. The weekly contribution averaged $499 during the year and this, too, was a record for the congregation. When measured by numbers, the decade was outstanding.

The Bellemeade building was extensively renovated in 1956. An annex was constructed and the existing structure was renovated. The project resulted in the seating capacity being doubled to accommodate 600 people (including the overflow room and balcony). The number of classrooms was increased to 25, the mechanical systems were replaced, and the building was redecorated throughout. The renovated project was first used on June 24, 1956. A report from that day notes that attendance at the two worship services (morning and evening) totaled 832.