While the decade of the fifties was dominated early by the Korean War and McCarthyism, it is generally viewed as a “quite time” for our country. Cultural changes were far from radical (well perhaps the explosion of Elvis Presley on the music scene might challenge that conclusion). The environment was generally “religion friendly.” All in all it was a good time for serving the Master in Evansville, IN and at the Bellemeade congregation.

That environment changed dramatically in the next decade. The sixties would be measured by such watershed events as the Bay of Pigs, the October (Cuban) Missile crisis, the assassinations of John and Robert Kennedy and Martin Luther King, Vietnam, and the Six Day War. America would see rioting in the streets, the beginning of the Peace Corps, space travel and Woodstock during this 10 year period. Our educational systems would become increasingly hostile to religious activities. The phrase “God is dead” would seep into our language and writings of the day.

Why are these things mentioned in a history of the Washington Avenue congregation? It is to note that the country and world began to dramatically change and it is this background that shadowed the activities of the congregation during the sixties. Religion came under attack on many fronts and reaching people with the story of Jesus was more difficult. This changing societal environment had an impact on the work of the congregation.

Did the church close its doors because of these things? Of course not. Worship services continued (two Sunday morning worship services and Bible school studies were started in 1961), mission work was still a center piece (domestically and internationally), focus on evangelistic efforts at the community level were important and youth groups still functioned. Frequently during these years groups of members would attend summer Bible lectures at David Lipscomb College or Harding College. To help support the expanding church activities and programs, the congregation employed its first Associate Minister. As God intended, the church family was still a safe haven for its members and the “brothers keepers groups” had their beginning to support and encourage the membership. Many of the programs started during the previous decade were still in place and working effectively. And, an expanded interest surfaced in the Bible School program, leading to better teaching techniques, teacher training and the overall administration. Age appropriate Bible School departments were more clearly defined and better supervised.

New families became a part of the congregation and, yes, sadly some of the members died or moved away. At decade end attendance was growing and the weekly contribution had increased. In 1969 the annual spending budget was just over $89,000, having grown from approximately $30,000 in 1960. Record numbers in both areas (attendance and budget) had been reached. Washington Avenue, as the congregation was then named, was well known in the community.

Through all of this the members of the congregation went about daily making a positive difference in the lives of people throughout the community, in the region and in other parts of the world. While doing so they remained strongly committed to Christian principles and Christian living, and were focused on working in the Master’s cause.

But, by decade end it had become harder. The playing field was shifting, the challenges were greater and achieving congregational objectives was more difficult.

Sadly, the spirit of cooperation among, and within, area congregations began to weaken during this decade. Differing views on matters arose and conflicts surfaced. The Christian environment was more unsettled. The congregation did not escape the “troubles” of these times. During the period sharp differences of view arose among some members at Bellemeade resulting in individuals departing to become members of the Morgan Avenue congregation. Later these differences softened and a sense of cooperation re-emerged among members.

More Construction and Another Move

Perhaps more than anything else, the sixties could be viewed as a “property decade” for the congregation. While the church was not about buying, owning, building and renovating property, it was caught in a period of time when those activities became urgent and consumed an inordinate amount of energy.

During the early years of the period, the Bellemeade congregation was challenged by the lack of parking space to accommodate members and visitors, insufficient classroom space to teach the growing population of students and a church building roof that was collapsing. And, on a somewhat humorous (though serious) front, the off-street, unlit parking lot had become a popular parking place for the romantic young people of the community. The parking problem was solved by acquiring adjacent property and expanding the parking lot (along with putting up outdoor lighting). The broken roof trusses were rebuilt and the roof replaced. The classroom space deficiency was more difficult to overcome and the proposed solution was to build an educational building. That solution did not materialize; it was aborted when the congregation learned in 1964 that U. S. Highway 41 was to be rerouted across the congregation’s property. Moving was in the immediate future. The Bellemeade property had served the congregation well…but the future was to be elsewhere.

The highway relocation news triggered an intensive search for a new location. While several sites were explored, good fortune (some might say providential direction) made it possible for the congregation to acquire 8 acres of prime real estate on Washington Avenue. Following the property acquisition in 1967 and making financial arrangements (a combination of sales proceeds from the Bellemeade property, bank loans and issuing church bonds solved this challenge), a ground breaking celebration was held in the spring of 1968. Construction was completed in March, 1969 and the first worship service was conducted on Sunday March 23, 1969. As the period came to a close, the only facilities issue to be resolved was paving the new parking lot and that occurred the following year. Dealing with major property issues did not surface again until the early nineties. The picture reflects what the new building looked like in 1969 (as seen from Washington Avenue). Yes, it does look the same today. The other picture documents the ground breaking crew. 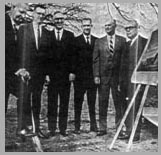 In connection with the purchase of the Washington Avenue real estate, the church was incorporated as a legal entity in 1966. The first trustees of the corporation were Bert Hart, Charlie Smith, Carl C. Powers, Roy Lee, Willard Tucker and Selton Phipps. This incorporation had no theological or spiritual bearing and did not change the mission or focus of the church.